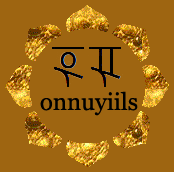 Siinyamda is an artistic language designed by Britton Watkins for the 2014 indie sci-fi film Senn directed by Josh Feldman. If its writing might look like Chinese or Korean to someone unfamiliar to these languages, it has been designed from the Roman alphabet. The Siinyamda language has been influenced by French, Italian and Portuguese for its phonology, by Japanese for its grammar, and by Cherokee for its verbs.