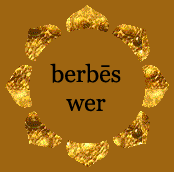 Wardwesân is an imaginary language spoken by the Ward people in the kingdom of Aghâr during the first and second centuries after Zaragabal. Created by the French Frédéric Werst, Wardesân is developed in his book Ward (1er et 2ème siècles), which is an anthology of their work in Kemarzan, their classic language. This book is bilingual, as the texts are written in both French and Wardwesân. It also contains a detailed grammar and a dictionary.

Write a number in full in Wardwesân

Let’s move now to the practice of the numbering rules in Wardwesân. Will you guess how to write a number in full? Enter a number and try to write it down in your head, or maybe on a piece of paper, before displaying the result.