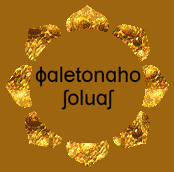 Hiuʦɑθ (romanized as Hiutsath) is an artistic language designed by the Professor of Linguistics Jessie Sams (also known for her collaboration with David J. Peterson for the Méníshè, Engála, and Tpaalha artlangs). It appears in a series of novels written for young adults, in which it is spoken by the 48 Xiɸɑθeho (Gifteds), a race of women who, though they look human in appearance, have special abilities (or Gifts). They currently live in the Ozarks area in Missouri. It is written in an abjad loosely based on the Greek alphabet, in which each letter looks like a scrap of ribbon.

Due to lack of data, we can only count accurately up to 9,999 in Hiuʦɑθ. Please contact me if you can help me counting up from that limit.

Write a number in full in Hiuʦɑθ

Let’s move now to the practice of the numbering rules in Hiuʦɑθ. Will you guess how to write a number in full? Enter a number and try to write it down in your head, or maybe on a piece of paper, before displaying the result.