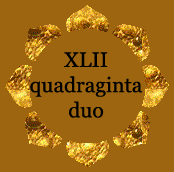 Latin (lingua Latina, sermo Latinus) is an Italic language originally spoken in Latium and Ancient Rome, from II BC to II AD, then through the Middle Ages. Extinct language to the extend it has no native speaker, Latin is still one of Vatican City co-official languages (alongside with French, German and Italian).

Due to lack of data, we can only count accurately up to 9,999 in Latin. Please contact me if you can help me counting up from that limit.

The Roman numbers are formed from seven letters or symbols: I [1], V [5], X [10], L [50], C [100], D [500], and M [1,000]. Used in ancient Rome and during the Middle Ages, they allow to count up to 4,999 through a both additive and subtractive system. To form a number, we add the symbols from left to right until we get three identical symbols (this is the additive part: I, II, III, XXII), then we place on the left side of the bigger symbol the number to subtract (this is the subtractive part: IV, IX, XC). The same symbol cannot be used more than three times in a row, except for M (MMMM is 4,000). Unlike the decimal system, it is an additive system where each symbol has its own value, independent of where it is placed.

To be valid, a number written in Roman characters must follow these rules:

Write a number in full in Latin

Let’s move now to the practice of the numbering rules in Latin. Will you guess how to write a number in full? Enter a number and try to write it down in your head, or maybe on a piece of paper, before displaying the result.