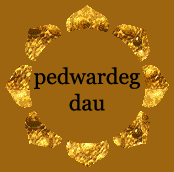 The Welsh language (Cymraeg), belongs to the Celtic languages of the Indo-European languages family, and more precisely to its Brittonic branch. Spoken in Wales, but also in England and Argentina (in the Welsh colony of Y Wladfa), it counts about 700,000 speakers.

Traditional Welsh uses the vigesimal system, hence based on twenty and its multiples, rather than on ten and its multiples (the decimal system otherwise used). It is still used to express age and years, but is replaced by the decimal system for its ease to learn for English-speaking people.
Its tens are: deg [10], ugain [20], deg ar hugain (ten on twenty) [30], deugain (two twenties) [40], hanner cant (half hundred) [50], trigain (three twenties) [60], deg a thrigain (ten on three twenties) [70], pedwar ugain (four twenties) [80], and deg a phedwar ugain (ten on four twenties) [90].
In the vigesimal system, compound numbers are formed starting with the unit, then the particle ar, a or ac, and the ten: un ar hugain [21], pedwar a deugain [44], hanner cant a chwech [56], tri ar ddeg a phedwar ugain [93].

Write a number in full in Welsh

Let’s move now to the practice of the numbering rules in Welsh. Will you guess how to write a number in full? Enter a number and try to write it down in your head, or maybe on a piece of paper, before displaying the result.

The Welsh Language: A History
by Janet Davies, editors University of Wales Press (2015)
[