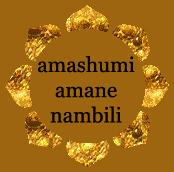 The Zulu language (isiZulu) belongs to the Niger–Congo languages family, and more specifically to the Bantu branch. It is spoken in South Africa (where it is co-oficial with ten other languages: Afrikaans, English, Ndebele, Northern Sotho, Sotho, Swazi, Tswana, Tsonga, Venda, and Xhosa), but also in Lesotho, Malawi, Mozambique, Swaziland and Zimbabwe. The Zulu language counts about 10.3 million speakers.

Zulu is a language with clicks, borrowed from the neighboring Khoisan languages from South and East Africa, such as Taa (or !Xóõ), !Kung (or !Xũ), Juǀʼhoans (or Zhuǀ’hõasi), and Khoekhoe (or Nàmá). Other Bantu languages like Xhosa and Sotho use clicks. A click is a sound produced with the tongue or the lips without using the lungs. The Zulu language counts three of them: the dental click, the palatal click, and the lateral click.

The Zulus count on their fingers starting with the little finger of the left hand to the left thumb, and continuing with the thumb of the right hand. The digits from six to nine keep the meaning of that way of counting: the word for six, isithupha, means “thumb”, the word for seven, isikhombisa, means “the one that points out”, eight, or isishiyagalombili, means “two remain”, and finally nine, or isishiyagalolunye, means “one remains”.

Write a number in full in Zulu

Let’s move now to the practice of the numbering rules in Zulu. Will you guess how to write a number in full? Enter a number and try to write it down in your head, or maybe on a piece of paper, before displaying the result.