One world, one language, one currency (Unu mondo, unu lingvo, unu mono).
This slogan of universality in Esperanto engraved on the back of the 1 stelo coin from 1959 expresses the unity sought by Esperantists in the promotion of this international auxiliary language with a history starting at the beginning of the XXth century. Several Esperantist currencies have already been created, and the creation of a cryptographic currency with an evocative name, monero, shows how easy it is to create words in Esperanto thanks to the system of affixes of this language.

The first Esperanto currency was the spesmilo, proposed in May 1907 by the Swiss René de Saussure. With a value of 0.733 grams of fine gold, which was worthing at the time 50 US cents, or 2 British gold shillings, one spesmilo is divided into 1,000 spesoj. The word spesmilo means “one thousand spesoj”, the speso being the base unit. Coins of one spemilo and two spesmiloj have been minted by the Swiss company Holy Frères to be presented at the World Esperanto Congress of Bern, Switzerland, in 1913. On this occasion, a gold coin of 50 spesmiloj was offered to Ludwik Lejzer Zamenhof, creator of Esperanto.

In 1907, the German Herbert F. Höveler founds the Ĉekbanko esperantista, or Esperantist Checking Bank. Based in London, with branches in Dresden and Moscow, it allows to establish checks denominated in spesmiloj, widely used by the Esperantist community of the time. On April 30, 1914, the bank counts 730 accounts in 320 cities and 43 countries. Unfortunately, it is liquidated when Höveler dies in 1918, no successor willing to take over.

The project comes back to life in 1927, when Dreves Uitterdijk and J. Hengel found the Universala Spesmila Banko, or Universal Spesmila Bank, in Laren, Netherlands. Several spesmiloj notes are issued, the currency still being convertible into gold, but the project collapsed at the beginning of the 30s.

A second currency is born in 1959: the stelo, or “star” in Esperanto. Created by the Universala Ligo, or Universal League, an organization based in the Netherlands, it begins in the form of coupons with a facial value of 1 stelo, then 10,000 bronze coins of 1 stelo are minted in 1959, as well as 10,000 brass coins of 5 steloj, and 10,000 copper-nickel coins of 10 steloj. They are followed in 1965 by 25 steloj coins (1,000 in cupronickel, 5,000 in silver and 10 in gold). If these coins have a certain numismatic value, it is difficult to know whether they were actually used as currency. They can rather be considered as souvenir medals, or tokens.

During the 2010s, plastic coins of 1, 3 and 10 steloj are used during esperantist events. On the obverse of the 10 steloj coin lies a crocodile, an Esperanto word game as “krokodili” means “to talk in a national language” in Esperanto, which happens generally after a few drinks, drinks consumed in non-alcoholic bars, or “gufujo” (from guf, eagle owl, and ujo, nest), while the eagle owl itself is depicted on the obverse of the 1 stelo coin. As for the 3 steloj coin, it represents a parrot, a very talkative volatile.
Those coins are managed by a council called Stelaro that sets its price. In April 2017, the stelo was valued about 0.24 euro cents. 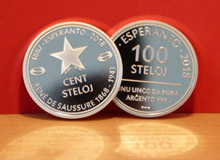 For the 150th anniversary of René de Saussure birth, Walter Klag, Austrian esperantist, uses the services of the the Austrian Mint to mint 1,000 one ounce silver coins, with a facial value of 100 steloj.
These coins are still available for sale: more information in German (pdf) and in Esperanto (pdf).

In 2008, the French-Danish artist Daniel Salomon founds the Sennacia Banko, or “Bank without nations” in Esperanto, via the unofficial Esperantist organization Heliko, or “Snail” in Esperanto. This art performance “bank“ issued a M100 (100 Monoj) bill, denominated in monoj, or “money“ in Esperanto. Even if this banknote is only an artistic project, the notes are produced by a commercial currency printer in Asia, showing a picture of Ludwik Lejzer Zamenhof, the creator of Esperanto, on one side, and a snail, representing Heliko, on the other.

On April, 18 2014, a new cryptographic currency is created in the wake of the Bitcoin: the Monero, or “money” in Esperanto. It is a decentralized electronic money, based on a blockchain (the account book of all transactions made), the same technology as Bitcoin. This currency has two main characteristics: it is anonymous (we cannot know past transactions, the accounts used, nor the amount exchanged), and it is not greedy in computing resources. In fact, to validate transactions and include them in the blockchain, which is called “mining”, has to go through calculations, which are rewarded by the creation of new monetary units. Mining is done directly in the processor, without requiring a dedicated machine, allowing everyone to participate to the experience and to mine ones own coins. In Octobre 2017, one monero worths about $96 with a market capitalization above 1,4 billion US dollars.

Lexicon and formation of words in Esperanto

If the monero is not affiliated to the Esperanto community, its name is indisputably Esperanto, and it is possible from it to create a whole vocabulary using the system of affixes of this universal language.

In Esperanto, the word mono, “money”, is a direct borrowing from English. Its radical mon- is suffixed by -o, to form the noun. This is how vocabulary is created in Esperanto: the addition of invariant morphemes to a radical expresses a grammatical feature (here, the noun categorization).

If we add the affix -er, which expresses uniqueness, individuality or unity, we create the word monero, “coin, currency unit”, also suffixed by -o to make it a noun.

The plural mark of nouns and adjectives is -j in Esperanto. Thus, moneroj, plural of monero, means “coins, currency units”.

The affix -uj- expresses the concept of container. A monero wallet is a monerujo.

To translate the concept of blockchain, we can consider it as the place (suffix -ej) where monero resides. So we will call it monerejo.

As for the affix -ar, for the concept of group or collection, it can be used to create moneraro, the community around this currency, composed of moneranoj, thanks to the affix -an, “member”. This community is made up of moneĉjoj and monenjoj, from the affectionate affixes -ĉj- (male) and -nj- (female).

To indicate a profession, a professional, or someone who has a regular activity, we use the affix -ist. Thus, moneristo is a monero professional. But a monero developer is called monerigo, a person who does something, which is indicated by the affix -ig.

The people who keep their moneroj, often in order to see their value grow significantly, are called moneringoj, the -ing- affix expressing the idea of holding something. In the crypto-currencies lingo, they are also called HODLers. This word play comes from GameKyuubi’s typo back in December 2013 in a forum where he was trying to explain people that holding was better than trading when you are not really good at it.

From this example, based on a single radical expressing the concept of money, it is very easy to create a whole series of words thanks to the agglutinative aspect of Esperanto and to its regularity which makes it a very productive and easy to learn language. As to whether the monero will be the next currency of the Esperanto community, only time will tell.

© 2009-2020 Mancko | Site map | FAQ | Links
English | Español | Français | Português
This site uses cookies for statistical and advertising purposes. By using this site, you accept the use of cookies.